This topic describes the steps for installation of openSUSE 11.0

Finally it was an easy and straight forward procedure. But in the beginning I run in a trap and have a little messed up my system. What happend:

The WLAN card is one with Atheros chipset which is supported by Madwifi. Because the madwifi driver contains some proprietary part it's not included in distros. Some posts (i.e. http://www.linux-community.de/Neues/story?storyid=26172 (German)) reports you have to use a special madwifi version. You can calm down - just the actual one does also its job. There are tons of manuals how to install a madwifi driver in the net (try http://madwifi.org/wiki/UserDocs/FirstTimeHowTo). So here comes a brief overview only:

After a YaST Online Update I got a new kernel installed. Of course the Madwifi modules are not installed automatically. But even manual reinstalling of the Madwifi driver didn't work.

I had to take a new version (the hal version from 20080903) from snapshots.madwifi.org and:

The Aspire One comes with a LED for the Wifi feature. In the Linpus Linux it indicates whether the WLAN card is turned on or off by the hardware switch.

Initially it's not working. You have to change kernel parameters to reanimate it. The commands are

For the last option you also can use the values 0 and 2. Read the madwifi article below what these options mean.

Another article to get more info about the LED is http://madwifi.org/wiki/UserDocs/EnableLEDs.

The question still is where to put these commands in.

For my opinion boot.local is not the right place. My favorite was an udev rule. But it didn't worked at all for me. The

looked fine after applying a RUN rule similar as described in the Madwifi link above. But the parameters were not set in the proc folder. So I placed the following entries directly into /etc/sysctl.conf:

The webcam works quite out-of-the-box. openSUSE installs the uvcvideo driver per default and the camera runs without any additional setup.

To check its function I used the luvcview program but you can use another one as well. The camera is not properly taken by Kopete which is a minor problem for me.

The Aspire One is not a member of the S2RAM whitelist. Thus Suspend to RAM doesn't work initially.

I've tried s2ram -f and it seemed to be ok. So I created a file called config inside the /etc/pm/config.d directory and put the line

The builtin features of KPowersave now works also with Suspend to RAM.

There are open issues:

The Skype install is very simple. Just download the relevant RPM file from the Skype homepage and install it with YaST.

A detailed description can you find here.

So far I didn't get the internal mic working. Even with a headset the sound quality is really poor.

In the meanwhile the headset was also not working whatever mixer settings I've choosen.

So I tried to update the ALSA package. For that include

as a package repository. Then update all packets - especially the alsa ones.

After a restart (no sure it's needed but I updated tons of other software as well…) I got my headset working in Skype with acceptable recording quality.

Of course the Window Manager, XSystem etc. are not specific elements for the Aspire One. It is one of the most subjective matter in IT design. However, here comes my solution:

On my other systems I still work with KDE 3.5.9. They are productive devices and I'm not keen enough to change them to a unknown version. They run on openSUSE 10.3 too.

On the other hand the Aspire One is just for PIM, media play, Internet and maybe to process some real files from time to time. So I decided to use KDE 4.1 and I'm really impressed.

I had tested the 4.0 several times on different machines but I was never so excited to quickly blow away my old but stylish KDE3 systems.

The Aspire One and KDE 4.1 are a great team. The system is fast enough to serve all the discreet eye candy (I hate burning or wobbling windows…) The KDE 4.1 works stable and brings enough options to create a useful and ergonomic desktop.

All my other systems have huge screens. I don't have any program icon on the desktop but in a taskbar instead. I tried this approach on the Aspire One but the screen is way too small.

So I created a desktop geared to the original Linpus Linux. Here comes a screeshot: 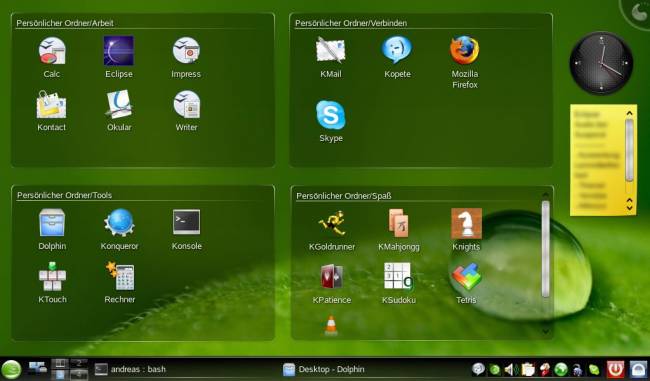 Finally I'm quite happy with my solution. But I check carefully whats ongoing in terms of Netbook UIs. There are some interesting projects like Ubuntu Netbook Remix.

Still there are some open points with minor priority:

1) This actually was the trap I run in. The Madwifi package serves either the ath5k as well as the ath_pci module. Just one of them can be active at a given time.

Except where otherwise noted, content on this wiki is licensed under the following license: CC Attribution-Noncommercial-Share Alike 3.0 Unported